I am graduated as a Computer Engineer from Marmara University in July 2021. I've been taking roles in various software projects for 3 years now. I enjoy exploring technologies, participating in competitions, and experimenting. I am a passionate, motivated, analytical, and organized team player who learns constantly. I took roles either in small startups and corporate companies and I am comfortable with working on projects with multidisciplinary teams.


Check out my blog about single-board computers: singleboardblog.com

Bachelor of Science in Computer Engineering

Computer Science and Engineering program, accredited by Müdek which is a member of Washington Accord and ENAEE (European Network for Accreditation of Engineering Education).

Full-year English language school aiming to provide an education for a sufficient English level to every participant. In the final qualification exam, I had first place in my class and qualified as C1 Advanced Level.

As a team of two, we developed a UAS control software to make unmanned aerial vehicles able to land on moving vehicles. The system is using a support module on top of the ground vehicle. The support module helps the system to execute this operation at higher speeds than the other systems around. We built the unmanned aerial vehicle, the ground vehicle module and the marker to execute a real-life demo. The demo was successful and we got very good feedbacks from the academic staff in our school.

The Best Graduation Project of the Year 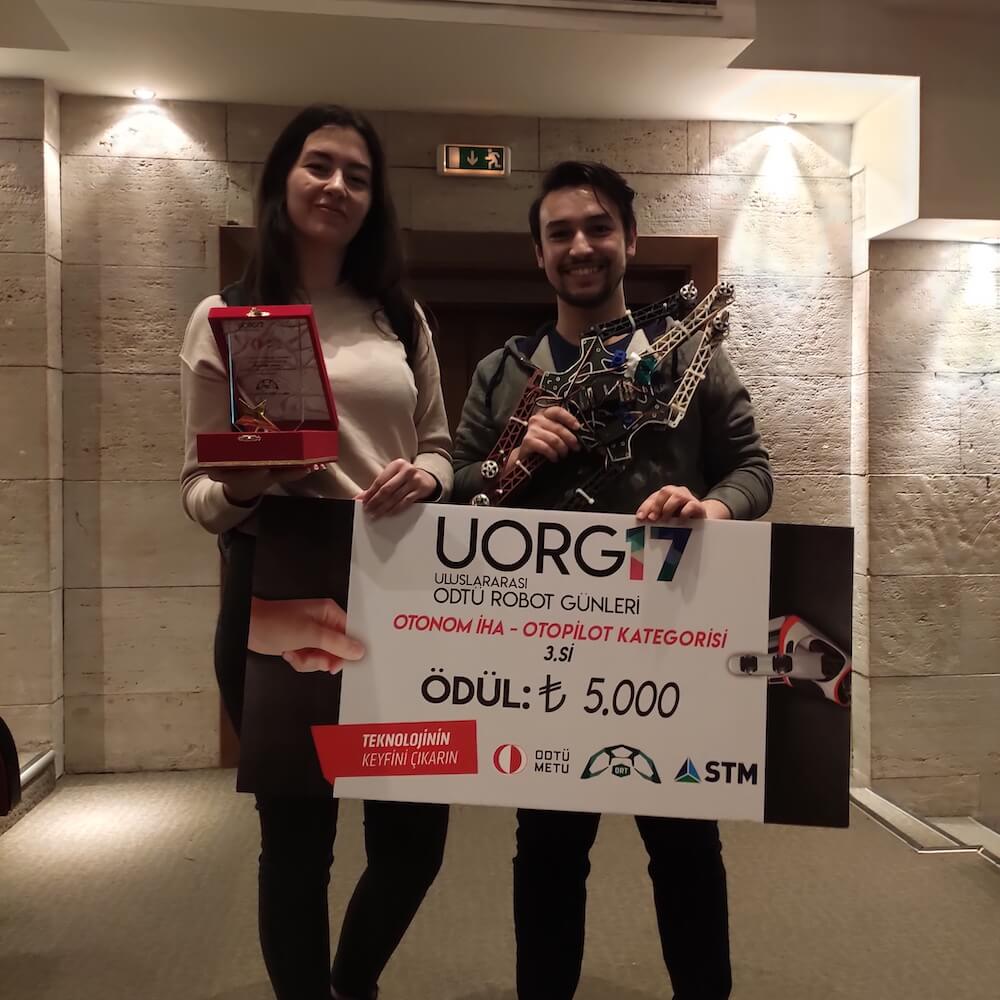 We developed a customized Ardupilot firmware with a new flight mode. This new flight mode was executing a mission that contains 3D space movements with a constant yaw movement at an unknown global location. The main challenge is to fulfill the task without using a companion computer of outer computational connection. We used Gazebo to test the firmware at the early stages. As a team of two, we had one night to build a new drone for the competition, because our experimental firmware destroyed the first drone while testing it on the tennis court of our university :)

We built a drone that can fly autonomously on a field and take geotagged photos with a Raspberry Pi Zero and NoIR Camera Module on it. As a team of two, we developed and used our own analysis software to take those geotagged photos together and used infrared data to estimate the health of the crops on the field, so we were able to make an estimation about the expected harvest amount and we were able to report the crop health with sufficient precision.

We used a hexacopter to carry and drop any payload with a weight under 2 kilograms. Autopilot system was using Ardupilot firmware on an APM 2.6 and autonomous control system was using Python Dronekit on a Raspberry Pi 3B. We used lots of custom-made 3D printed parts (like GPS Stick, Landing Gears, Payload Dropping System) on a DJI F550 frame. The project isn't developed for a specific competition but it had the aim of testing out our new autonomous control framework, 3D printed parts on a stock body, and propulsion system optimization methods to be able to carry payloads as heavy as we can carry. As a result, we successfully implemented and tested the whole project. We used a remote-controlled robot equipped with a robotic arm as the payload. The drone was capable of making autonomous flights to the desired destination, land on the desired point, place the tactical robot and return to launch. 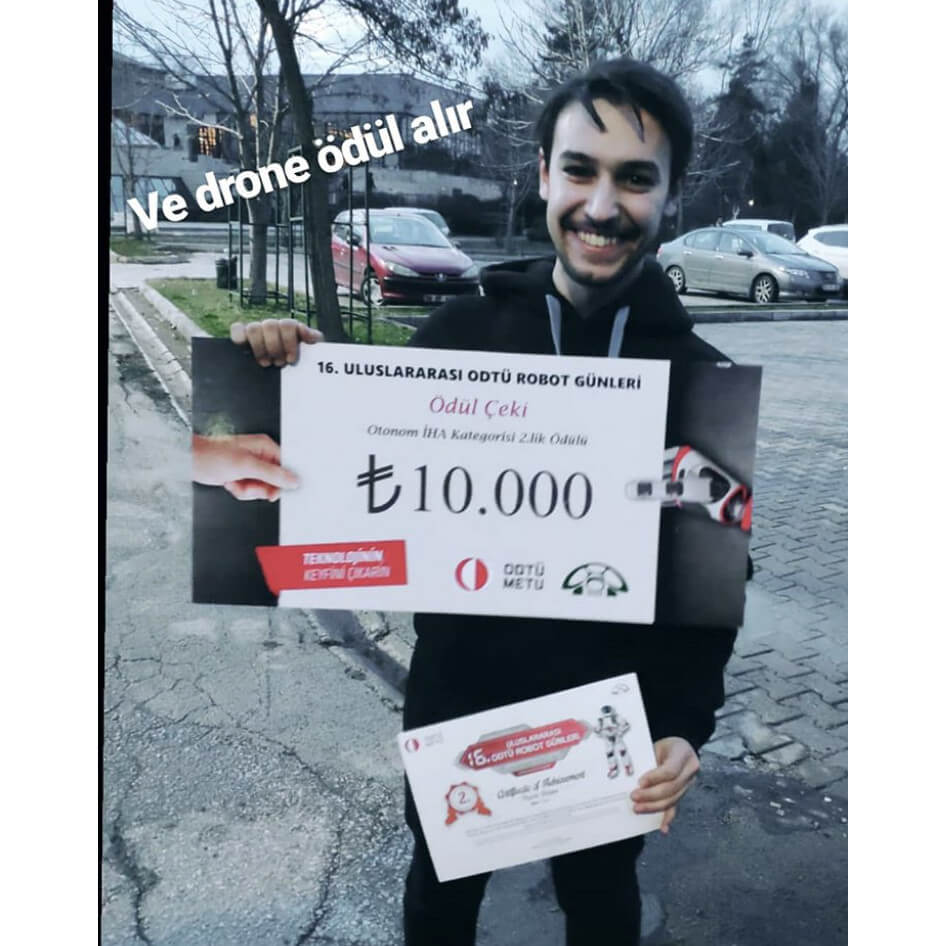 Worked on a drone that is aimed to be capable of moving in a corridor with the abilities of obstacle avoidance and image processing without GPS signals. APM 2.6 card is used with a Raspberry Pi. Pi Camera and several ultrasonic sensors were used. Python Dronekit, PyMavlink, and OpenCV were at the core of the control software. 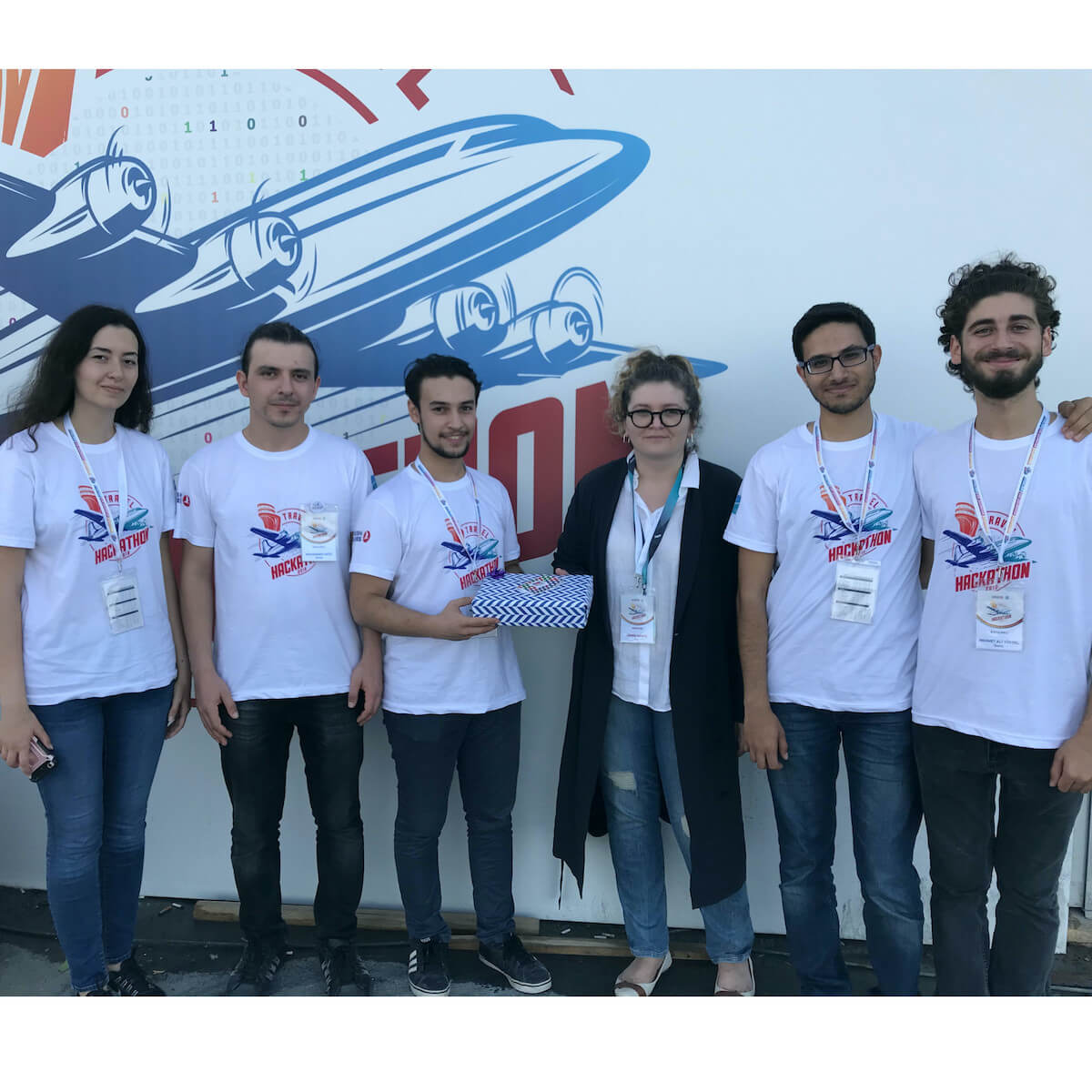 As a team of five, we built an app to help the flight crew to navigate from home to the airport, meet with the other crew members in the same briefing room and help them to see vital background information of each other easily. We have built a native Android app, used lots of different APIs opened by the supporter companies of the Hackathon, and wrote our own API to make briefing room assignments, keep their availability information, and store crew information. We have interviewed active Turkish Airlines crew members in the development process and considered their suggestions. I developed the backend API with NodeJS and MongoDB, helped with the organization and management of the development process, and supported teammates with various integration processes such as Here Maps SDK.

We have built software to control an AR Drone 2.0 platform. OpenCV, npm ar-drone package was in the core of the control software. This was one of the first autonomous drone competitions in Turkey. We were the only successful team to make the drone fly in the desired space. On the left, our drone is being recorded for the news on state television. Yeah, it's hard to believe but we programmed our first autonomous drone with NodeJS :) 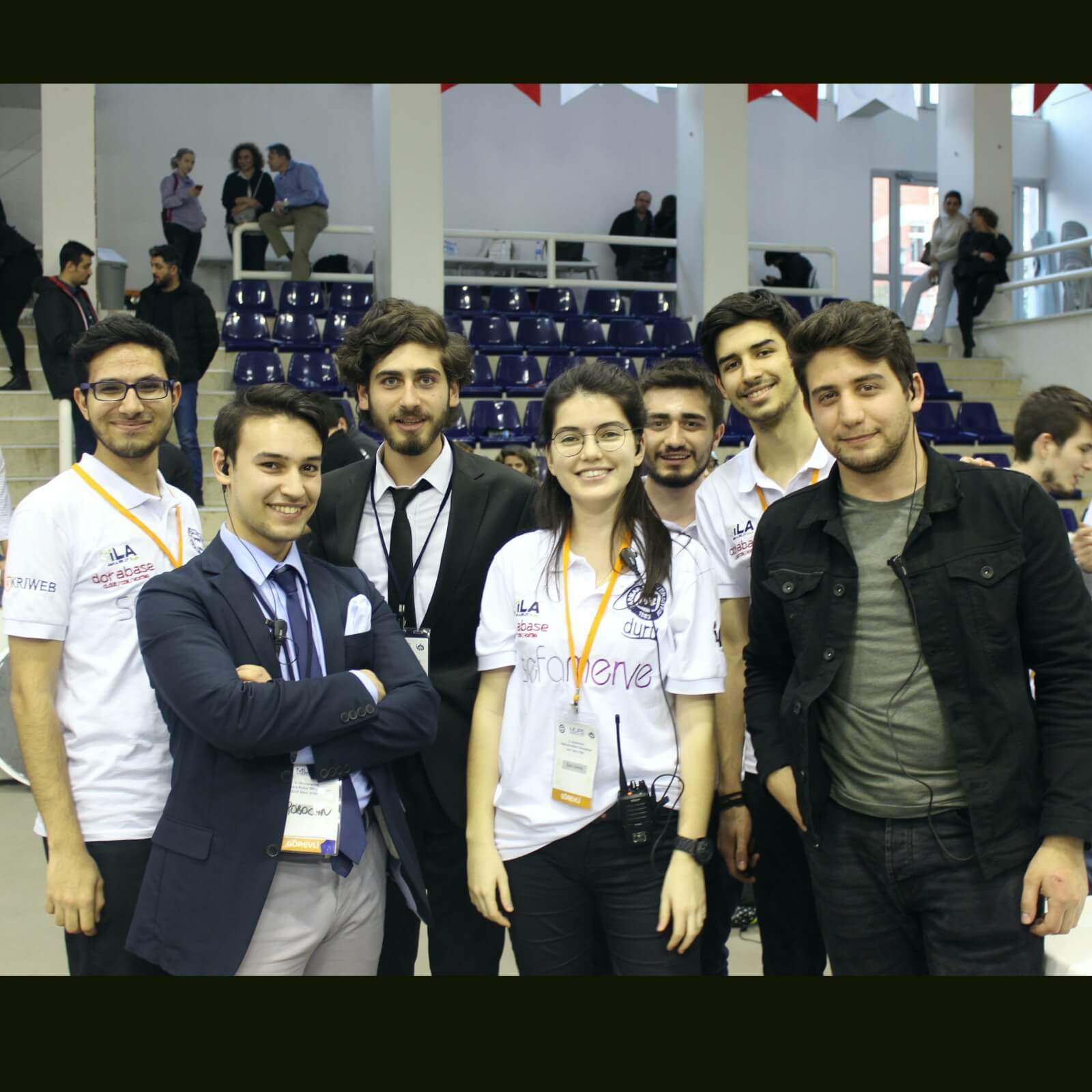 As host not participant, Head of Financial Coord. Department

I have been commissioned to manage and organize Financial Coordination Team to reach out to the potential sponsors and partners for the Marmara University International Robot Olympics 2018. As a team, we successfully provided the required financial support to the organization, prizes, and technical costs. We also developed long-term contacts from the private sector to work with on further projects. 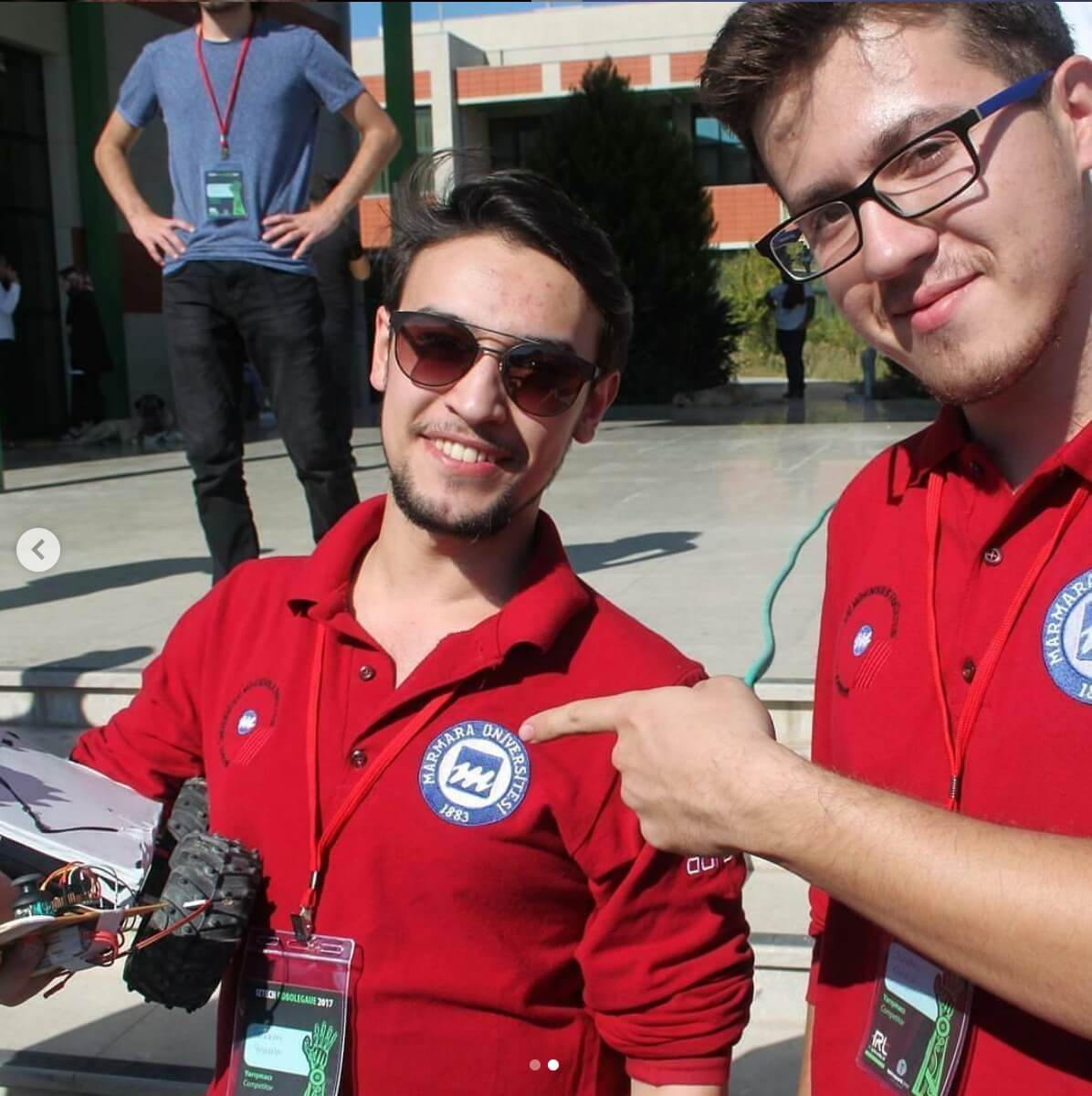 We as a team of three, developed a rough terrain vehicle to participate in IZTECH Roboleague 2017. The vehicle had powerful motors and a relatively smaller body. It was able to keep going whether it flips around thanks to its horizontal symmetry. We used HC-06 Bluetooth modules and two joysticks to control the vehicle. Two joysticks, each controls one pair of motors at the left and right sides of the vehicle, which made its controls very similar to a tank and maximized its maneuverability. I participated in the electronics and control design of the vehicle and I was the operator of the vehicle during the competition. 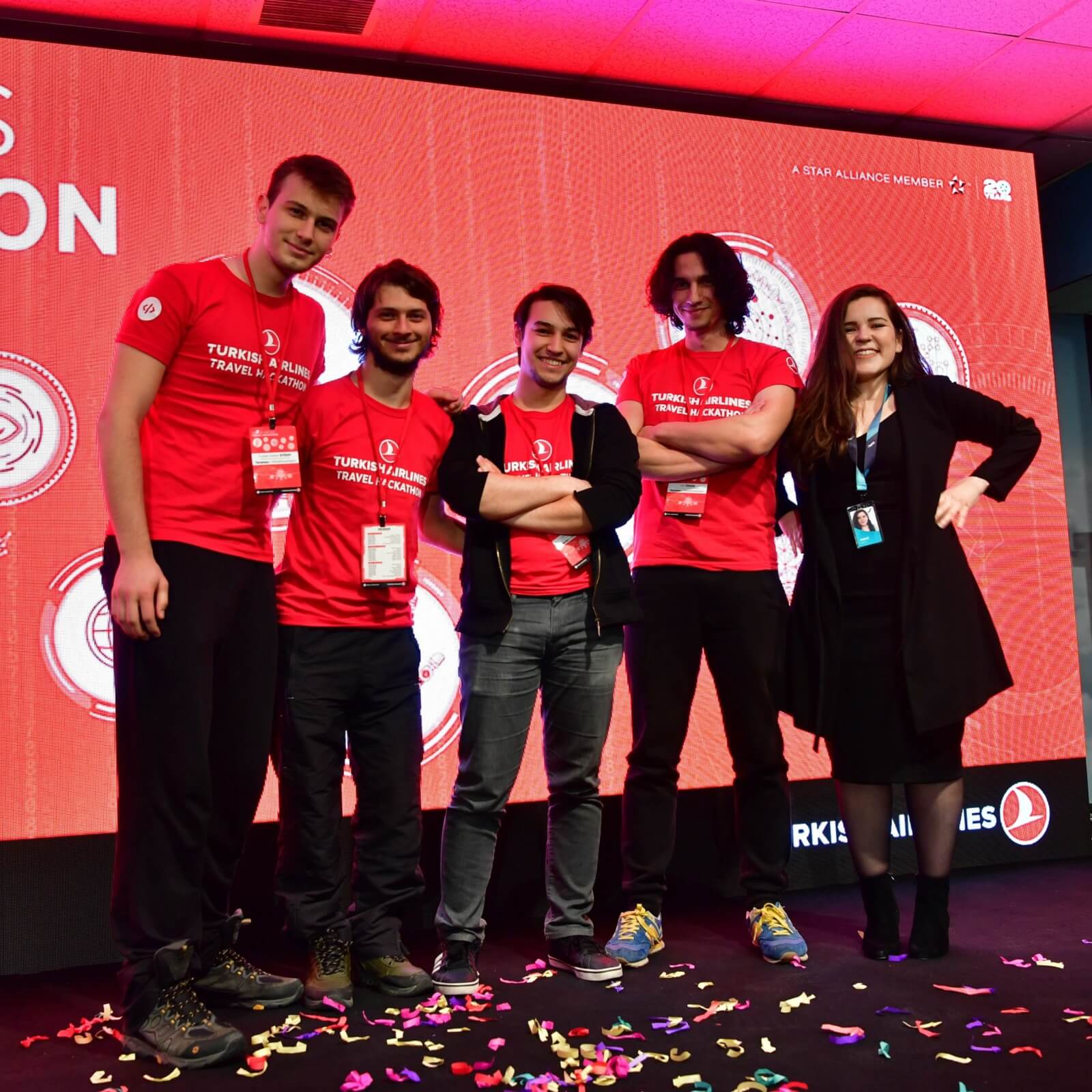 We as a team of 4, developed a native Android app to make users able to see on a map their earned miles from a frequent flyer program called Miles&Smiles. So users were able to plan a new journey, set goals, add places to favorite lists and share their travels on social media. In the perspective of marketing, this approach had the potential of making users plan new journeys with their miles and buy additional tickets for the way back instead of using the miles to make already planned trips free. After our project, Turkish Airlines decided to use this feature for their Miles & Smiles program. I took the role of the integration and manipulation of the map feature by using Here Maps SDK.